Mick’s Glass in Sydney are able to renovate, repair and restore your traditional Federation windows, Heritage Glass windows and Victorian Windows . Our range of refurbishment services will improve the comfort, energy efficiency and security of your home or office, without detracting from the original heritage appearance.

Draught proofing heritage windows improves both functionality and energy efficiency, at a fraction of the cost of replacement windows. Glazing upgrades are available to further improve thermal and acoustic insulation.

Established for over 50 years we have restored and upgraded thousands of wooden windows & doors. All of our installation staff are experienced, qualified craftsmen with extensive knowledge of traditional timber windows & doors. Whatever the problem with your period windows & doors, Mick’s Glass has an expert solution.

Mick’s glass Heritage window restoration has reglazed and restored many glass structures over the years. We have extensive knowledge in the field of glass and glazing from curvature glass domes to the conservation of stained glass windows.

Onsite repairs of leadlight windows
In square or diamond stained glass we have, over the years, made repairs to the lead light in situ. This saves the cost of a full replacement. By using special tools and glazing methods, Mick’s Glass has developed techniques that can repair the glass in these beautiful windows without the need to replace them. Our clients are delighted we have repaired them on site and saved them the cost of replacement.

Bringing life back into stained glass
Mick’s Glass has developed methods to bring your stained glass back life. We have, on a number of occasions, repaired listed structures where we restored the windows but the lead light was worn or faded. Careful cleaning, preparation, use of special pastes and buffers will restore your lead light to its original condition. 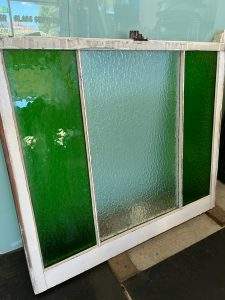 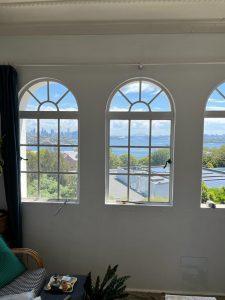 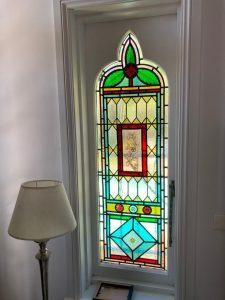 There are many periods in history where window styles have been distinctive. Here is a list of the period windows you are likely to see in Australia and a little bit of information about them. Use this to help you identify your windows.

Early Victorian (1840 – 1860)
Houses built in this time were generally simple; the windows were normally double hung or simple casement style windows that were centrally placed. The design of houses was basic as was the style of windows in them. One noted fact is ‘muff glass’ or ‘cylinder glass’ was used in the windows and would be till the introduction of float glass in the 1950’s.

Mid Victorian (1860 – 1875)
Houses in this era had more ornamental style and verandas were common. The windows were either double hung or casement style, with some houses having tripartite formats in the front (normally a fixed section with opening windows on either side) More arch windows where produced in the latter period and horns and designs were added to sash frames for more decoration.

Late Victorian (1875 – 1901)
In this period the window style remained is the same, but as more wealth and confidence came houses became more grand. The designs of windows and doors incorporated the use of coloured glass in doorways and fanlights above the windows, arch windows were popular and lance top windows were used in buildings that normally would be seen in churches or state buildings.

Queen Anne (1895 – 1910)
Derived from English and American styles, the houses were complex and even more grand in their settings. Normally free standing houses, it was not uncommon to have casement frames and double hung window located in many sections of the house. Fanlights and stained glass were common features as well as coloured glass in sidelights and above the doors.

Edwardian also known as federation (1895 – 1910)
Houses built in the era draw from the Queen Anne period and Victorian influences. The windows in many cases were bunched and leaded glass. They were the feature in many of this style of house. Double hung and casement style frames were the norm, but as with earlier periods, coloured and stained glass were a popular feature in this period.

The inter war years (1918 -1939)
Window architecture changed due to economics and costs during this period. The rise of the art deco style window was becoming a feature in many houses and work places. The double hung and casement frame windows were still produced in wood, but steel casement style windows were being used in many buildings. This was due to the durability of steel frames. Larger glass windows gave more vision. These styles became a feature in houses and workplaces.

Post war years (1945 – 1965)
After the Second World War the change to modern architecture become apparent in window design. Home ownership and more wealth showed in the designs that used art deco style. Mass production of windows resulted in far more use of glass as feature. Brick veneer buildings were common. Bay windows were being built for houses and curvature glass could be afforded in the art deco style windows. Custom made sash windows were becoming less common and the introduction of the float glass was to provide fundamental changes to the window and glass industry worldwide.

Modern windows 1965 to present day
Windows and glass were becoming massed produced. Aluminium and double glazing become popular, sealants were used more and spring balances were used in double hung windows. The steel window industry went into decline due to cost savings available by the use of aluminium windows. Awning windows were used in many houses and apartments but casement and sash windows were still being produced. Windows were now available in many different materials including wood, aluminium or upvc. They are so well designed that they are commonly used as features in homes.